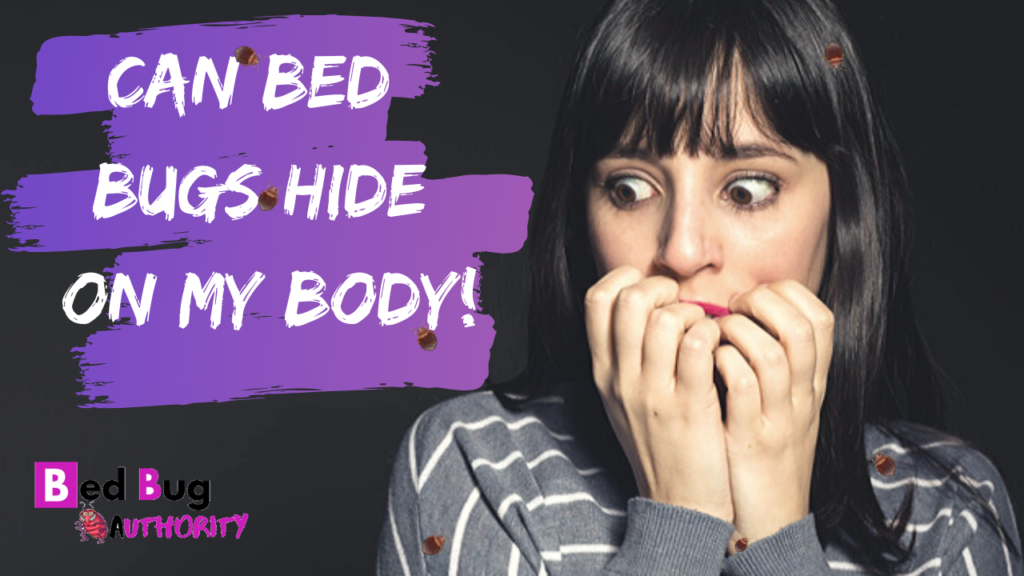 IS IT POSSIBLE FOR BED BUGS TO HIDE ON OUR BODIES?

Chances are good that you’ve heard of them, or even had a friend who has had a run-in with these pests that love to bite humans, feeding on their blood and leaving an itchy, painful rash behind. For most of us, to say bed bugs sends a shiver of fear up the spine, yet many people don’t actually know much about this insect, its habitat or its habits.

Can you find bed bug eggs in hair, and are these pests able to live on clothing or our body? Do they fly or cause diseases? And how difficult are they to get rid of, once they’ve invaded your living space? The more you know about bed bugs, the better you can protect yourself and your home from a bed bug infestation.

A very common question homeowners ask is “Where do bed bugs hide on your body?”. For the most part, bed bugs are hiding during the day, they retreat into the smallest crack and crevices in areas where people sleep. These areas tend to be close to where they can feed during the nighttime hours and could be in a crack or another narrow, protected space in a bed frame, couch box spring, mattress, recliner or your headboard.

Since bed bugs can multiply quickly, these pests can move onto other parts of your home if not controlled, making elimination extremely difficult. As we will discuss throughout this post, as we address other frequently asked questions, bed bugs do not hide on humans because they prefer a cooler, safer environment. So, they actually don’t hide on your body. After they have taken their blood meal, bed bugs will retreat into a safe location to begin the process of digesting, which can take quite some time before they strike again.

If bed bugs don’t live on your body, can they live in our hair? 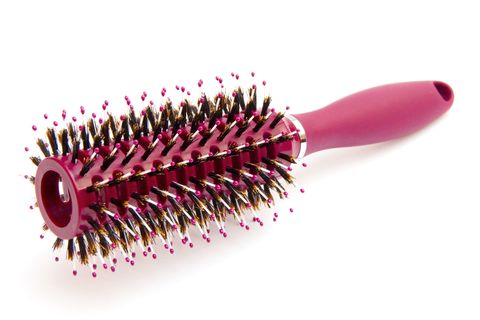 Symptoms Of Bed Bugs In Hair

Can bed bugs live in your hair? The short answer is no. That doesn’t mean they can’t bite you on your scalp, forehead, cheeks or neck, you see, bed bugs’ legs and bodies aren’t designed for crawling through human hair. They prefer a cooler environment than that created by human body heat, so even if they do happen to feed on the skin of your head or neck, they aren’t likely to stick around afterward.

Bed bugs can bite you on the legs, hands, and arms, but are more likely to feed on your neck and head. One reason these bugs are so sneaky is that their bite doesn’t hurt, so an affected person doesn’t often notice until they have a reaction.  That’s how infestations get out of control when people don’t have an allergic reaction to their bites and bed bugs go undetected. Female Bed Bugs can lay up to 5 eggs a day so, you do the math.  A bed bug will most likely get you on the face since they prefer bare skin. Symptoms of bed bugs in hair might include red, intensely itchy welts along your hairline or across your forehead, cheeks or neck and small dots of blood on your pillow. Bed Bugs don’t typically take up residence in human hair the way lice or fleas might, and they typically bite skin that is exposed, not covered by hair. Now, if you do have insect bites on your scalp, it’s less likely to be a bed bug than some other insect.

After two to five minutes of feeding, the bed bug will retreat to the closest hiding spot, where it will begin the digestion process, which can take several weeks. After that point, the bed bug can lay eggs which are about the size of a grain of sugar. Since bed bugs don’t live on humans, they also won’t lay their eggs on humans, so you won’t have to worry about getting bed bug eggs in your hair. 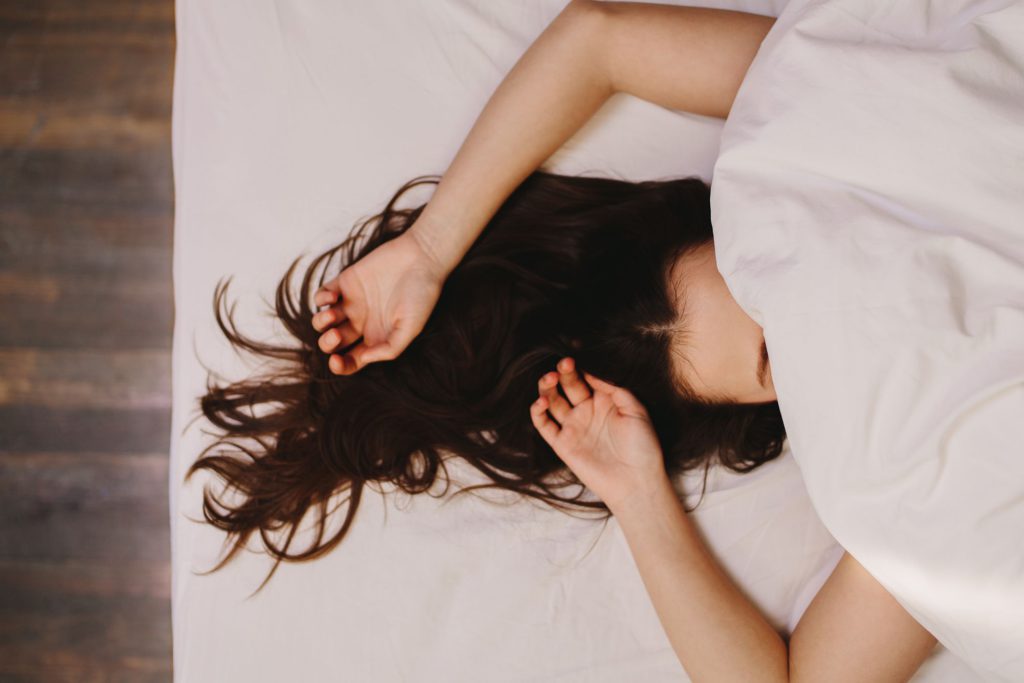 Can Bed Bugs Live On Your Body?

While travelers are known to carry bed bugs with them from one destination to the next, these insects are highly unlikely to hitchhike on your body, in your hair or in the clothes you’re wearing. Instead, they’re far more likely to hitch a ride in the clothes you aren’t wearing that is, the ones in your luggage or backpack. That’s why it’s so important to take prompt measures if you suspect you’ve stayed, slept or stored your belongings in a bedbug-infested room on a trip.

If you’re traveling and you suspect you’ve stayed in a room or traveled on a bus or train that was infested with bed bugs, it’s important to wash every bit of your clothing as soon as possible, in the hottest water available, and then dry them on the highest setting. Both high temperatures and steam kill bed bugs, so these steps should get rid of the problem. Use a flashlight to inspect your shoes, bag, and other items as well, paying extra attention to the small folds and corners. You might need to dispose of your suitcase and get a new one.

Bed bugs normally leave several bites in a row which become itchy, red and irritated. These pests prefer to feed on bare skin, so it’s more likely that you will notice a bite on your arms, legs or neck rather than your scalp. The most obvious exception to that rule is if you are bald.

While many victims of bed bug infestations experience allergic reactions to the bites, some have no symptoms, other than small dots where the creature feeds. Some people notice a clear raised center on the affected area. In the most severe cases, individuals may experience nausea, blisters, fever, and difficulty breathing after being bitten.

You can see photographs of bed bug bites on the website of the Environmental Protection Agency, in a clinical review by the Journal of the American Medical Association and in an informational report on integrated pest management to control bed bugs.  In these images, you will notice that bed bug bites resemble mosquito and flea bites, which is why bites from all of these insects can often be confused. 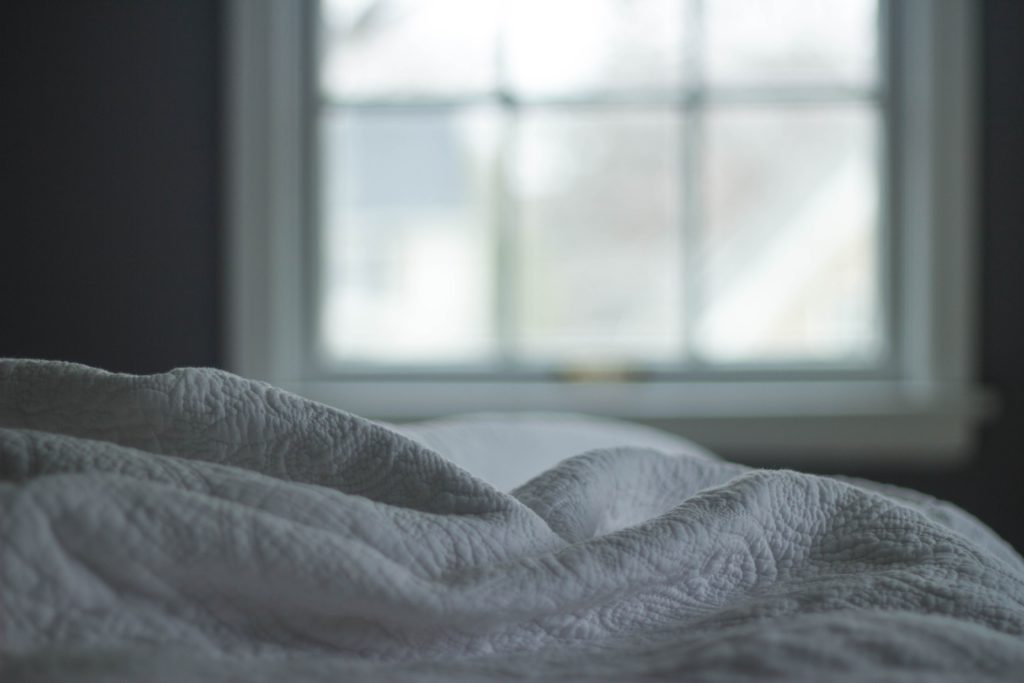 After being all but eradicated in the 1940s and ’50s, Cimex lectularius—also known as bed bugs—began making a resurgence all over the world in the early 2000s due to the insect’s growing resistance to commonly used insecticides. Full-grown bed bugs are small, only about a quarter-inch in diameter—about the size of an apple seed. Reddish-brown in color, bed bugs have banded, oval-shaped abdomens that can turn bright red after feeding, when they’re full of blood. Since they are so small and flat, they can slip into spaces that are as narrow as a credit card. Similarly, they’re often able to go undetected in the folds of mattresses or armchairs, beneath rugs and in other furniture and living spaces.  Since these pests live indoors, there is no “high” or “low” season for bed bugs.

Bed bugs are mostly nocturnal and seem to be most active in the wee hours of the morning. Still, they have been known to bite during the daytime as well. The bad news for us, bed bugs seem to be impervious to most commonly used insecticides and bug repellent sprays (the kind you would use, for example, to repel mosquitoes and ticks), so spraying your bed or your skin before bedtime won’t help you avoid the bite of this pesky little nuisance.

It’s important to know that bed bug infestations are not due to an unsanitary environment. Even the cleanest homes and hotels aren’t immune to an infestation since bed bugs do not live in filth—they live off the blood of mammals, including humans. So wherever humans (and other mammals) live, bed bugs can live too, even if it is kept unclean. 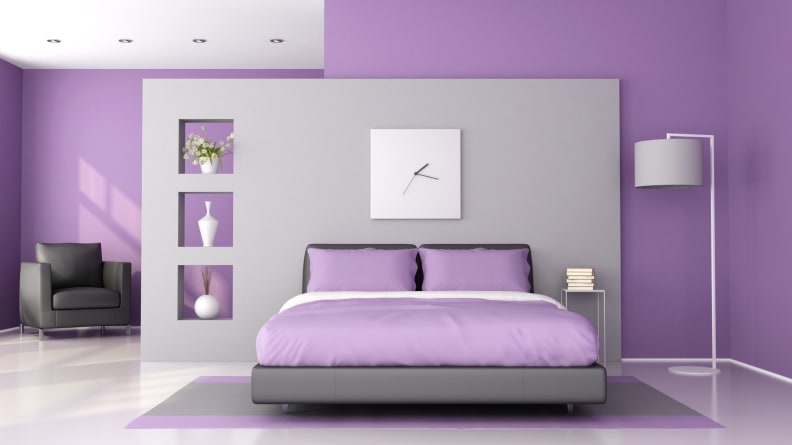 How To Know If Bed Bugs Are In Your Home

Travelers know bed bugs can live and hide in many places besides the bed itself. Bed bug infestations can also spread to upholstered couches and chairs, not to mention trains, buses, and other areas. Bed bugs can also crawl up walls, hide behind picture frames or headboards or sneak into the cracks and corners of furniture drawers.

The same inspection technique you use when traveling might help you determine whether you have a bed bug infestation in your home, but eradicating them from your living space is likely to be much more difficult and costly than just ridding them from your overnight bag after a trip. Signs of a bed bug infestation in your home include, first and foremost, itchy bites that appear in lines on your skin. Other signs you might find in your bed, on walls or on other furniture include blood spots on sheets and mattresses, dead bugs or exoskeletons, pale whitish or yellow nymphs (baby bed bugs) and bits of the insects’ dark, blood-filled excrement.

The Good News About Bed Bugs

When it comes to bed bugs, it’s not all bad news. Here’s the good part: first, unlike mosquitoes or some other pests, bed bugs are not carriers of infectious diseases. So even if you do have bed bug bites, you won’t pick up with any nasty bacteria or illness beyond the effects of the bites themselves. Another bit of good bed bug news is that they don’t reproduce very quickly—not as quickly as other pests, anyway, such as cockroaches or flies. And speaking of flying insects, since bed bugs can’t fly, at least you’ll only have to deal with them crawling on you, not zipping airborne into your hair.

When bed bugs infest your home, any way you look at it, they’re bad news. In fact, pest professionals call bed bugs the most difficult pest to treat. If the professionals have trouble, the average homeowner may find it nearly impossible to eradicate bed bugs. That’s why you have to treat them early. When an infestation gets big then you need to use the big guns called whole house heat treatments.

Getting Rid Of Bed Bugs In Your Home

If you suspect you might have bed bugs in your home, the best thing you can do is to treat early.  Treat at their early stages by doing a thorough inspection to determine whether it’s bed bugs or some other pest that has invaded your home.  Then eradicating the problem using methods that are proven to get rid of bed bugs, once and for all. 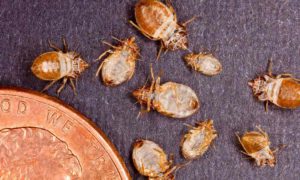 What Are Some Truths About Bed Bugs? 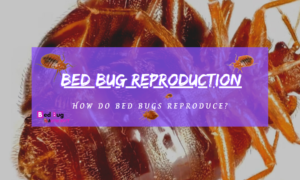 How Do Bed Bugs Reproduce? 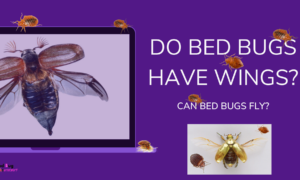 2 thoughts on “Can Bed Bugs Hide On Our Body!”