Sabrina Jales St. Pierre is suing the Palm Desert Embassy Suites after she was allegedly “massacred” by bed bugs during her stay.

A model is suing a hotel in California after she said she was “massacred” by bed bugs following a visit to the hotel.

Sabrina Jales St. Pierre, who has modeled for brands such as Victoria’s Secret, Tommy Hilfiger and Ralph Lauren, alleged in a lawsuit filed June 5 in Riverside County Superior Court that her visit to the Embassy Suites by Hilton Palm Desert affected her modeling career.

Brian Virag, St. Pierre’s attorney, said that St. Pierre “started noticing the bed bug bites after her first night in the hotel, and eventually she was massacred by bites covering pretty much her entire body.”

The model says she suffered so many bites, it affected her career.

The bug bites the model suffered, Virag said, were some of the worst he’d seen during the eight years he’s spent as a bed bug lawyer.

He added St. Pierre “experience[d] psychological trauma” and, “because her body is her work,” the ordeal “severely affected her work and her career.”

Sabrina Jales St. Pierre’s lawyer claimed his client was “massacred” after she was bitten by bed bugs at the Embassy Suites in Palm Desert.

The hotel’s general manager, Carlos Mendoza, denied the building had a bug infestation, telling the newspaper the hotel and an outside pest control company both swept the room after the allegations were made and there were no bugs to be found.

The general manager of the Embassy Suites by Hilton Palm Desert has denied having a bed bug problem.

Goes to show you that no one is immune to bed bugs and it doesn’t matter if you’re famous or rich, you can just as easily get bitten by these little bloodsuckers. By doing a room inspection every time we check in to a hotel, we can save ourselves a lot of headaches and/or pain from BED BUG BITES. 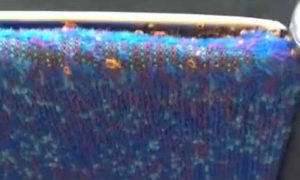